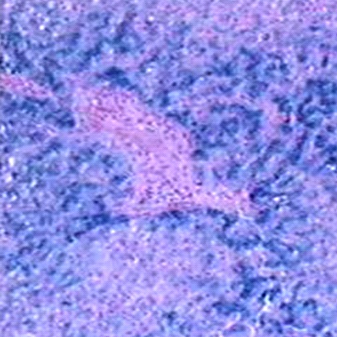 Hepatic iron overload is common and is caused by a variety of etiologies: genetic hemochromatosis with the risk of cirrhosis, post-transfusionnal hepatosideroris or hepatosiderosis dysmetabolic , probably more frequent but less pronounced.

These are genetic diseases essentially by mutation of the HFE gene that are responsible for hyperabsorption of iron by the small bowel, resulting in its accumulation mainly in the hepatocytes. It is one of the most frequent genetic diseases in northern European populations.

Type 1 by mutation C282Y-C282Y of the HFE gene on chromosome 2 is by far the most common. There are rarer forms of type 2 (juvenile), type 3 (transferrin receptor), type 4 (ferroportin disease), type 5 (a single Japanese family) and type 6 (L-ferritin). Only types 4 and 5 are dominant. Hemochromatoses are most often recessive.

The most frequent hemochromatosis is responsible for a hepcidin deficiency. This protein produced by the liver is an inhibitor of the intestinal absorption of iron but also of the exit of iron from the macrophages. Thus, in case of deficiency ingested iron is massively absorbed by the intestinal cells and it is stored in the hepatocytes. Ferritin levels are high and the saturation coefficient of circulating transferrin is above 50% and can even reach 100%. Iron does not accumulate in the macrophages of the reticuloendothelial system (spleen in particular) because they release it easily. In fact, since hepcidin is absent, it no longer inhibits the ferroportin , a membrane protein, which allows the iron to exit the cells.

Type 4, also known as "ferroportin disease", is exceptional but deserves to be individualized because it is responsible not for hepcidin disturbance but for mutation of ferroportin. This time the transmission is dominant. It has two subtypes:

Hemochromatosis is therefore primarily responsible for a pure hepatocyte initially overloaded. The consequence is the progressive appearance of cirrhosis with its complications including hepatocellular carcinoma but also, in this field, intrahepatic cholangiocarcinoma. Early diagnosis and the implementation of a depleted treatment can prevent this risk.

In addition to genetic surveys, diagnosis should be made, if possible before clinical signs ( asthenia , joint pain in particular of the fingers, melanoderma, diabetes ...), by discovering a hyperferritinemia with a coefficient of transferrin saturation greater than 45%. The diagnosis is confirmed by the genetic test and treatment can be undertaken. It is simple and relies on regular bleeding by monitoring the decrease in ferritin.

To evaluate the fibrosing consequences of iron overload, a liver biopsy was recommended after 45 years only in case of heavy overload with cytolysis and ferritinemia greater than 1000. Currently, the easy quantification of iron by MRI and the use of fibrosis tests (biochemical or elastometric) currently reduces indications of biopsy. In case of cirrhosis with portal hypertension it is possible, in case of strong overload, to observe pancreatic overload. The analysis of the MR signal of the pancreas should therefore be systematic in front of major hepatic signal decrease. In the event of late discovery, the MRI before depletion should seek a focal lesion which is then more easily detected within a liver has a low signal. However, all focal lesions are not malignant and the characterization should take in account the relative modification of the signal between the liver and the lesion. After depletion, MRI does not have any increased performance to detect lesion and, as with any cirrhosis, only regular ultrasound monitoring is required to detect the occurrence of a malignant hepatic tumor.

Secondary hemosiderosis are mostly related to erythropoiesis (homozygous β-thalassemia, sickle cell anemia, sideroblastic anemias, dyserythropoiesis) that stimulate intestinal iron absorption and require repeated transfusions. Ferritinemia is an indicator of the level of overload but MRI can be very useful for monitoring the course of hepatic and splenic load and also for detecting the onset of myocardial overload which can lead to rapid heart failure. Indeed, the distribution of iron is no longer in the hepatocytes but in the reticulo-endothelial system. Hepatic iron overload can be major and only quantifiable at 1.5T using either the liver / muscle ratio with short TE of 2 msec or less or by R2 * (1 / T2 *) calculation but with extremely short TE, below 1 ms. However, since there is no relationship between the importance of iron hepatic load and the risk of myocardial overload, the exact quantification of a high overload has little practical effect. This is especially useful for monitoring the efficacy of iron chelating therapy since phlebotomies are not possible in this context of anemia.

Dysmetabolic hepatosiderosis is much more frequent than genetic hemochromatosis. It associates a moderate hepatic iron overload with one or more metabolic abnormalities: overweight, high blood pressure, dyslipidemia or disorder of carbohydrate metabolism. In half of the cases, it is accompanied by a single steatosis or even steatohepatitis. The diagnosis is thus referred to hyperferritinemia without inflammatory cause, readily associated with chronic cytolysis and without marked elevation of the coefficient of transferin saturation.

The distinction between the two entities is made by MRI, which shows usually a slight or moderate hepatic overload, associated with steatosis and slight splenic overload.